1923- Peeps invented. The sweet Easter marshmallow confection that is shaped like a yellow baby chick and can stick to most surfaces. 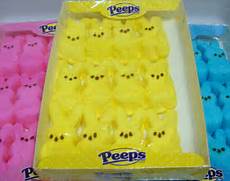 1947- THE FBI PAY A VISIT to Screen Actor’s Guild president Ronald Reagan and actress-wife Jane Wyman. They accuse them of belonging to Communist Party front organizations. Ronnie agrees to become an informer on his own guild, and just about everyone else in Hollywood. Jane Wyman later divorced him.

1952-ELIA THE FINK-Film director Elia Kazan ( On the Waterfront, East of Eden,etc.) saved his career but earned the lasting hatred of Hollywood by testifying to the House Un American Activities Committee. He named 8 of his friends as Communists, including writers Clifford Odets and Lillian Hellman.

1953- The Vincent Price film The House of Wax in 3d premiered.

1973- At Xerox PARC, Dick Schoups team of scientists created Superpaint, the first digital paint and surfacing system for CG images. The first picture on the computer was a photo of Dick holding a sign that read “ It works, sort of.”

Posted by Animation Educator's Forum at 1:42 AM