1864- Stephen Foster, the composer of "My Old Kentucky Home" and "Camptown Races" was found dead, a penniless drunk in New York's Bowery slum. In his hands was a piece of paper with the words "Dear friends and gentle hearts... ". A Pennsylvania Yankee, despite writing a lot of music about the South, he only visited it once, to New Orleans in 1852.

1906- The first ad for a radio appeared in an American Science Magazine. It boasted an effective range of over one mile !

1910- Dr. Lee Deforest, experimenting with his new radio vacuum tubes, broadcast singers from New York's Metropolitan Opera for the first time. The regular Texaco 'Live from the Met' broadcasts wouldn't get going until 1934.

1925- THE FIRST CALIFORNIA GURU- Indian spiritual teacher Paramahansa Yogananda , then called “The Swami”settled in Los Angeles and gave his first lecture to an audience in LA Philharmonic Hall. He taught westerners about these new things called Yoga and Meditation. He was a cause celeb, with friends like Luther Burbank, Armelita Galli-Curci, and the Barrymores. His Autobiography of a Yogi became a bestseller, read by the folks like Steve Jobs.
He founded the Malibu Self-Realization Center in 1950.

1943- Movie star Frances Farmer was dragged out of a Hollywood hotel in a straightjacket. She screamed Rats! Rats! and listed her occupation on her arrest record as “c**ksucker”. Her career was ruined and she spent years in asylums. But it’s inconclusive whether she had actually suffered mental illness, or it was her mother overreacting to her sullen, temperamental nature. 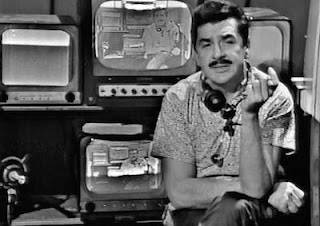 1962- In the wee hours of a rainy night, TV pioneer Ernie Kovacs died when he plowed his Corvair into a power pole at Beverly Glen and Santa Monica Blvd. He was attending a baby shower Billy Widler threw for Milton Berle and his wife. But it was also known that Ernie had a weakness for vodka and orange juice. At the funeral, the pastor said Ernie wanted his life summed up like this,” "I was born in Trenton, New Jersey in 1919 to a Hungarian couple. I've been smoking cigars ever since."

1979- The Young Men’s Christian Association filed a lawsuit against the rock group the Village People over their hit song “YMCA”.

1985- Carol Wayne, an actress who played bimbo blonde roles on shows like Johnny Carson, drowned while swimming in Mexico. She was 41.

Answer: A sultana was a sultan’s wife, also a seedless dried grape made into raisins. Originating in Turkey.

Posted by Animation Educator's Forum at 1:07 AM