1602- In Transylvania, 22 year old English soldier of fortune John Smith killed three Turkish warriors in single combat. Such single bouts were normal before large armies clashed. The Duke of Transylvania, Sigmund Bathory, granted the commoner Smith his own coat of arms, three Turkish heads. This is the same John Smith who will go to Virginia and meet Pocahontas in 1607.

1902- THE TEDDY BEAR BORN-The Washington Evening Star published a story of how President Teddy Roosevelt while hunting couldn't bring himself to shoot a grizzly bear cub. Cartoonist Cliff Berryman illustrated the incident with one of his signature “dingbat” bear cubs in a gesture of  “oh no!” Brooklyn toymaker Morris Mitchcom sewed a doll from the illustration in the newspaper and sent the first one to the White House. 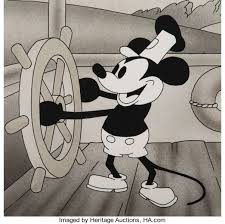 1928- HAPPY BIRTHDAY MICKEY MOUSE- At Universal’s Colony Theater in New York, Walt Disney’s cartoon "Steamboat Willie" debuted before a movie called Gang War. The first major sound cartoon success and the official birth of Mickey Mouse. Two earlier silent Mickey's were being completed, but when Walt saw Al Jolson speak in the Jazz Singer, he held those two shorts back so the sound experiment could go ahead. At this time Walt Disney had just 11 employees.