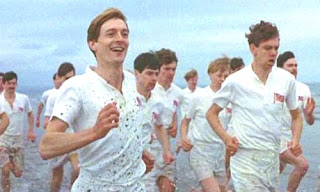 1981- Sir Hugh Hudson’s movie Chariots of Fire, about British Olympians at the 1924 Paris Olympics became a sleeper hit. The decision to let Greek composer Vangelis score the period film with an all-electronic synthesizer soundtrack became a sensation. Soon most of the movies of that time had synthesizer tracks. People said orchestras and bands would all be obsolete.

1986- People said there would never be more than three networks. Today the first show of the fourth network, The Fox Network's the Joan River's Show, premiered. That show didn't last, but future hits like The Simpson's, Married With Children and the X-Files made Fox a major network within ten years.

Posted by Animation Educator's Forum at 12:08 AM