1889- Start of the Sherlock Holmes mystery, the Naval Treaty. 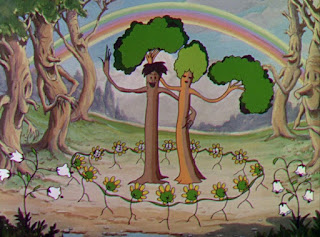 1932-Walt Disney’s “Flowers and Trees” the first Technicolor Cartoon. Disney had worked out a deal with Technicolor creator Herbert Kalmus to use his technique exclusively for two years to show larger Hollywood studios its quality.

1935- The first paperback book. Andre Maurois 'Ariel, a Life of Shelley', published in this new form by Penguin Books of London.

1936- Producer David O. Selznick buys the movie rights to the best selling book “Gone With The Wind” from an ailing Irving Thalberg. The "boy genius" Thalberg was hoping that Selznick would ruin himself in the process of making this film. Thalberg was convinced that GWTW would prove to be a massive flop because "Costume dramas are box office poison."

1988- The last Playboy Club in America closed. It was in Lansing, Mich. In 2006 Hugh Hefner opened a Playboy Club themed casino in Las Vegas.

1999- The Blair Witch Project opened in theaters. The low-budget indy became a monster hit due to an early on-line campaign claiming the footage was genuine.