1887- California land developer Harvey Wilcox takes out a county deed for a new ranch he calls 'Hollywoodland' after the name of an estate his wife admired back in Connecticut. It gave its name to the new Los Angeles town- Hollywood. The famous sign was put up in 1923.

1893- In New Jersey Thomas Edison and his Canadian engineer W. K. Dickson built the FIRST MOTION PICTURE STUDIO in New Jersey.  It was covered with black tar paper and nicknamed "The Black Mariah" because that was the nickname of police paddy wagons that it resembled.  It's debatable how much of the inventing effort was more Dickson than Edison.  Edison was only marginally interested in the movies. He was more concerned with how to extract New Jersey iron ore from rocks using magnets. Dickson worked himself into the hospital to make the studio work, and resenting Edison’s apathy started experimenting on his own. When Edison found out he fired him.

1896- Puccini's opera "La Boheme" debuts in Turin. It was based on Prosper Merimee’s popular book Bohemian Sketches. Puccini's old roommate Piero Mascagni (Cavalleria Rusticana) with whom Puccini and he once lived like Bohemian artists, tried to sue because he was writing a Boheme' also. The suit failed and Mascagni released his rival version, but it didn't hold up in comparison with Puccini's.

1964- Indiana Governor Matthew Walsh declares that the Rock & Roll song “Louie-Louie” by the Kingsmen was pornographic and should be banned. The FCC investigated and their conclusion was that the “lyrics are unintelligible at any speed”. The song remained a major hit.  In the 1980’s several schools in Northern Cal held Louie-Louie Marathons-96 straight hours of Louie-Louie played by Punk bands, polka bands, string quartets, water-glasses, and folk trios. Whoah whoah, Me gotta go, yo,yo yo yo. 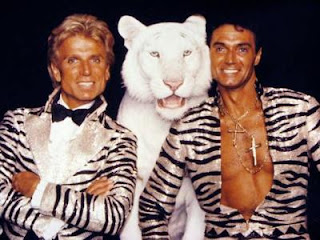 1990- Siegfried & Roy open their exclusive show at the Mirage Casino in Las Vegas. They and their white tigers have performed for Hollywood stars, presidents and Pope John Paul II. One Vegas columnist noted: “When Elvis performed in Vegas there were some empty seats. But there were nothing but full houses when Siegfried & Roy performed.” The act was finally ended when Roy’s throat was slashed by a tiger in 2003.