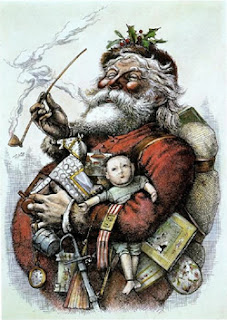 1823- SANTA CLAUS BORN. This day the poem "A Visit from St. Nicholas" was published anonymously in The Troy Sentinel, a New York newspaper. . Several years after the authorship was claimed by a Bronx Bible teacher, the Reverend Clement Clarke Moore, and he was celebrated in his time as the father of Santa Claus until his death in 1863. In 2000 a literary-forensic specialist challenged Clement Moores authorship. He claimed an Revolutionary War veteran from Poughkeepsie named Major Henry Livingston actually wrote the poem. He uses as evidence the poetry style of Livingston being much closer to the anonymous poem than Rev Moores. But we may never know.
The poem completed the synthesis of English and Dutch folk traditions that were merging in New York into our modern concept of Santa. The Dutch Klaus-in-the-Cinders" or Kris Kringle was an elf who climbed down chimneys to give children toys. He merged with the British Father Christmas or Saint Nicholas who was a big fat jolly bishop with a white beard in a red suit. Leaving cookies and milk out for Santa comes from an old Danish Viking custom at Yuletime to leave food out at night for Odin the Wanderer and his 8 legged horse Sleipnir.

In an 1859 reprint of the famous poem famed cartoonist Thomas Nast (who created the Republican elephant and Democratic donkey) drew the first likeness of Santa Claus. Because of residual rivalry from the Civil War claiming Santa was a Yankee or came from old Dixie, in 1867 Nast ended the argument by declaring Claus’s true address to be the North Pole. The Santa we all recognize was created by illustrator Haddon Sundblom for a Coca-Cola ad campaign in 1934.

1894- Claude DeBussey’s “Afternoon of a Faun” premiered in Paris.

1913- Young Italian Rudolph Valentino arrived in America to seek his fortune. He was so poor, that after a year he sent his parents a photo of himself in a borrowed tuxedo to show he was doing well. He worked as a nightclub dancer and gigolo until becoming a Hollywood film star in 1921.

1935- Walt Disney sent a detailed memo to art teacher Don Graham outlining his plans for retraining his animators to do realistic feature films.

circa-1935- This was the traditional day for Republic Pictures to fire all their employees and hire them back after New Years so they wouldn't have to pay them holiday pay. Republic billed itself on its business cards as The Friendly Studio.

1947- Two Bell laboratory scientists invent the Transistor. Nobody was quite sure what to do with the little thing until Texas Instruments invented the portable radio in 1954.

1973- Soap Opera “the Young and The Restless” premiered.

Posted by Animation Educator's Forum at 12:26 AM