1906- Opera star Enrico Caruso was charged for pinching a ladies bottom while visiting the Bronx Zoo. Caruso claimed a monkey did it.

1946- The Television Academy of Arts and Sciences founded. Fred Allen once said: "We call television a Medium, because nothing on it is Rare, or Well Done." 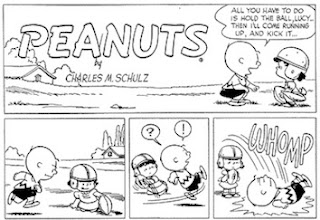 1952- The first time in a Peanuts comic strip where Lucy pulls away the football as Charlie Brown was attempting to kick it. It became one of Schulz’s best recurring jokes.

1960- CLARK GABLE DIED- The 59 year old star had just completed the film the Misfits, a film in which director John Huston demanded a great deal of physical exertion.  He had told his agent that the unprofessional antics of his moody co-star Marilyn Monroe had driven him so nuts they were going to give him a heart attack. Gable had one after shooting, ten days later while convalescing in Hollywood Presbyterian Hospital,Clark was sitting up in bed, joking with the nurse and reading a magazine. Suddenly he closed his eyes, leaned his head back against the pillow, and died. He was 59.
He wrote his own epitaph, but it was never used- " Oh Well, Back to Silents."

1981- Actor William Holden died. The handsome star of such classics as Sunset Blvd, Stalag 17 and Network, was told as a young actor to take a few drinks to calm the pre-camera jitters. But by now he was a hopeless alcoholic. This night at home alone and drunk, he fell and cracked his head on a table edge. Too inebriated to call for help, he dabbed his forehead with bunches of Kleenex tissues until he bled to death. He was 63.

1990- Disney’s feature film the Rescuers Down Underpremiered. The first traditionally animated film to be painted digitally on computer instead of acetate cels and paints.

2001- The film Harry Potter and the Sorcerer’s Stonepremiered to great fanfare and massive box office. Harry Potter’s creator J.K. Rowling had been so poor she at one time had been on the dole, now she was one of the richest women in the world. In England second only to Madonna and the Queen.

Posted by Animation Educator's Forum at 12:27 AM