1889- The first Juke Box installed at the Palais Royale Saloon in San Francisco. Created by Louis T. Glass, it used Edison cylinders instead of records and cost 5 cents a play. Juke comes from Juke Joint, a slang term then for a dance hall.

1897- Windsor Castle saw the first performance for Queen Victoria of a cinematograph moving picture. Her Majesty watched footage of the procession of her Diamond Jubilee taken in June.Also on the program was Monsieur Taffary's Calculating Dogs.

1936- The first florescent lighting tubes are installed in the U.S. Patent office.

1936- Time Magazine owner Henry Luce launched LIFE Magazine. The first picture on the cover was a dam photographed by Margaret Bourke-White. The second picture was a doctor slapping a newborn baby with the caption: “Life Begins!”

1942- PLAY IT AGAIN SAM- The movie CASABLANCA premiered. Based on a never produced musical, “Everybody Comes to Ricks’, Howard Koch and the Epstein Brothers adapted the play into one of the most memorable Hollywood movies ever. It was never expected to be more than a rehash of the popular Charles Boyer film Algiers. (Come with me to zee Casbah…”). Humphrey Bogart told a friend about his new project “ Aw, its just some more shit like Algiers.” Bogie acted opposite Ingrid Bergman, although he had to stand on boxes to appear taller than his Swedish leading lady. 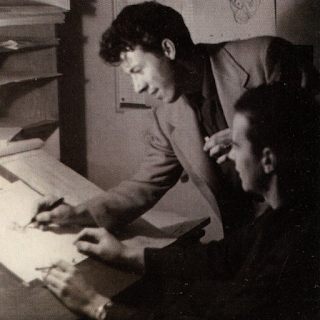 1960- The Hollywood Walk of Fame is dedicated, featuring over 1,500 names- but not Charlie Chaplin, who was banned until 1972 because of his lefty political views.

1966- The film “ Spinout “ premiered. Elvis Presley pioneered the genre movie of bored male movie stars who use their studio muscle to make us watch movies of them racing cars. But his outfit and his car inspired Japanese anime director Osamu Tezuka to design Speed Racer.

Posted by Animation Educator's Forum at 12:52 AM