1939- MGM tried a sneak preview of the film The Wizard of Oz. Afterward they debated cutting the song Somewhere Over the Rainbowas slowing down the story. Finally they decided to leave it in. The film debuted in August to wild success and acclaim.

1939- RKO pictures signed Orson Welles to direct movies in Hollywood. That Hollywood signed a 24 year old radio star who never made a single film, and gave him complete freedom and final cut was an amazing deal.

1966- Bobby Fuller who made the hit song "I fought the Law and the Law Won" was found in LA in his mothers Oldsmobile, beaten and dead from "forcible inhalation of gasoline"- huffing. 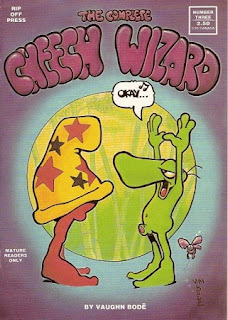 1975- Famed underground cartoonist Vaughn Bode’ died of auto-asphyxiation while high. His last words were to his son, “ Mark, I’ve seen God four times, and I am going to see him again soon. “ He was 33.

Posted by Animation Educator's Forum at 12:01 AM