1862- After a hard night partying with fellow poet Swinburne, pre-Raphaelite Dante Rossetti returned home to find his wife dead of an opium overdose.

1870- The town of Anaheim Cal founded. No Disneyland yet. The name means Ana, as in Santa Anna River, and Heim, the German word for home. Most of the settlers were German immigrants.

1888- The City of Long Beach incorporated. 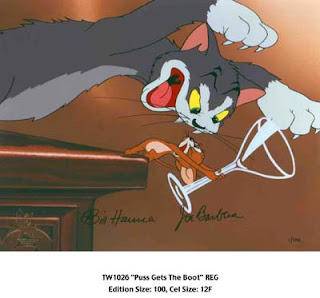 1940- MGM's "Puss gets the Boot" the first Tom and Jerry cartoon and the first collaboration of the team of Bill Hanna and Joe Barbera.

1949- The premiere of Arthur Miller’s play "Death of a Salesman".

1966- CBS co-ops broadcasting the senate Kennan Hearings on the conduct of the Vietnam War with reruns of "I Love Lucy'. CBS news division president Fred Friendly quit in protest.

1966- Jaqueline Susanne’s novel The Valley of the Dolls first published. Although critics considered it cheap and trashy- Time Magazine called it “Dirty Book of the Month”, and Truman Capote called Susanne in her heavy sixties eye shadow, a “Truck Driver in Drag” Valley of the Dolls sold like wildfire.  Its frank portrayal of single women enjoying casual sex and taking drugs in suburbia was a big step in the sexual revolution of the 1960’s.

Posted by Animation Educator's Forum at 12:46 AM