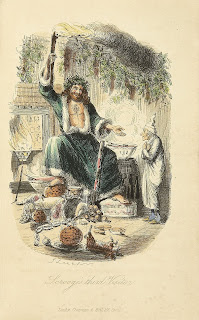 1843- Charles Dickens "A Christmas Carol: A Ghost Story for Christmas" first published. In the 18th century and earlier the Christmas celebration was a more rowdy affair with public drinking, marching around in costumes “mummery” and mayhem more resembling Mardi Gras.
The popularity of Dickens story of Scrooge, Marley and Tiny Tim did much to help Victorians change the nature of the Christmas celebration to a more intimate observance among centered on the family. Dickens said he wrote the story to make some money capitalizing on the new fashions for family Christmas celebrations around the tree begun by the example set by Queen Victoria and Prince Albert.

1865- Schubert's Unfinished Symphony (#8) received it's world premiere. In 1822 Schubert wrote the first two movements and 8 measures for the 3rd (Scherzo), then forgot about it when he died in 1828. A friend kept the manuscript in a closet for 43 years.

1955- Carl Perkins awoke in the middle of a bad nights sleep and wrote Blue Suede Shoes, the first song to be a hit in Country, R&B and Rock n’ Roll charts simultaneously, especially when sing by Elvis Presley” Well you can knock me down, step on ma face, etc.”

1969- The US Air Force terminated Operation Blue Book, the investigation of UFO phenomena.

1969- Walt Disney re-released Fantasia, and it was embraced by hippy stoners who liked to get high during screenings, Disney did a black-lite poster for it. It was the first time the 1940 film had ever made a profit.

1989- After appearing in some interstitial shorts on the variety Tracey Ullman Show, The Simpsons first premiered as a regular TV series.