1817- First sword swallower performed in the US.

1864- In a production of Shakespeare’s Julius Caesar at New York’s Winter garden Theater the three Booth brothers- John Wilkes, Edwin and Junius Booth appeared together for the only time. Other famous acting families of the time included the Powers, whose descendant was the movie star Tyrone Power, and the Barrymores, who’s line continues down today from John to John Drew to Drew Barrymore.

1867- Alfred Nobel patented dynamite. The riches he accumulated from this and Nitro-Glycerine he used to fund the Nobel Prize.

1869- Ned Buntline was a hack dime novelist who understood that selling stories about gunfighters of the west would be easier if you could occasionally produce one in the flesh. So on a trip to Nebraska he found among the cavalry scouts an accommodatingly colorful rogue named William Cody, who everybody called Buffalo Bill. This day Ned Buntline announced in the New York Weekly the first installment of a serial series “Buffalo Bill King of the Bordermen”. Buntline and Cody collaborated to make Buffalo Bill the first true American media star, entertaining millions including crowned heads until 1916.

1929- Alfred Hitchcock’s film Blackmail opened in London. It was the first full length talkie in Britain.

1949- Rudolph the Red Nosed Reindeer sung by Gene Autry hit number one on the musical charts.

1952- The stage adaptation of Agatha Christie’s mystery the Mousetrap opened in London’s West End and became one of the longest running plays in history. 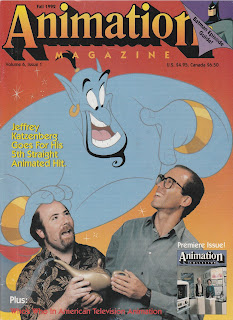 1995- Legendary Corporate CEO Akio Morita resigned as the leader of Sony. Under his guidance Sony went from a little postwar maker of electric rice cookers to the largest electronics giant in the world. His official reason was health problems, but insiders said the real problem was his headaches with Sony's Hollywood studios -MGM, Columbia, TriStar losing $2 billion. By the time he died in 1999, the Sony movie studios had pulled out of their slump and were on top with movies like Titanic and Men in Black.

1997- Pixar’s A Bugs Life and the short Geri’s Game premiered.

2009- Disney’s Princess and the Frog released.

Posted by Animation Educator's Forum at 1:01 AM