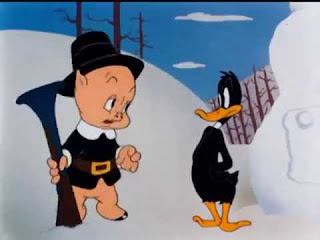 HAPPY U.S. THANKSGIVING ! A letter written in 1621 by pilgrim Edward Winslow described how Pilgrim Gov. Bradford and Miles Standish invited Massacoit and the local Wampanoag Indians to a feast to celebrate their first successful harvest. The custom of Thanksgiving was a New England custom for decades thereafter.
In 1789 George Washington had called for a thanksgiving celebration in late November to celebrate the new Constitution. But Pres. Thomas Jefferson thought Thanksgiving ” was the most ridiculous idea” he ever heard. He considered it a violation of the separation of church and state, as did Andy Jackson and Zachary Taylor. So the holiday didn’t really become an annual custom until the Civil War. Sarah Hale the editor of the Ladies Magazine, the Martha Stewart of her time, had been lobbying the US Government to make the New England tradition a national one.

In 1863 after the great union victory at Gettysburg, and his own re-election, President Lincoln issued a decree that the last Thursday of November be set aside as a feast of national Thanksgiving. To this day Thanksgiving is still declared by Presidential decree.

1874- Far from the Madding Crowd by Thomas Hardy first published.

1897- First Royal performance for Queen Victoria of a Cinematograph moving picture, at Windsor Castle. Also on the program was Monsieur Taffary's Calculating Dogs.

1936- The first florescent lighting tubes are installed in the U.S. Patent office.

1938- Bob Hope recorded his signature tune “Thanks for the Memory” for the movie The Big Broadcast..
1942- PLAY IT AGAIN SAM- The movie CASABLANCA premiered. Based on an never produced musical, “Everybody Comes to Ricks’, Howard Koch and the Epstein Brothers adapted the play into one of the most memorable Hollywood movies ever. It was never expected to be more than a rehash of the popular Charles Boyer film Algiers. ( Come with me to zee Casbah…”). Humphrey Bogart told a friend about his new project “ Aw, its just some more shit like Algiers.” Bogie acted opposite Ingrid Bergman, although he had to stand on boxes to appear taller than his Swedish leading lady.

During the famous scene where the French exiles drown out the singing Germans with a stirring rendition of le Marseillaise the Germans are singing Watch On the Rhine. The director wanted them to sing the Nazi Party anthem the Horst Wessel Song but the Warner Legal Dept discovered it was copyrighted! We’re fighting them Nazis, but we don’t want them to sue us!

1960- The Hollywood Walk of Fame is dedicated, featuring over 1,500 names- but not Charlie Chaplin, who was banned until 1972 because of his lefty political views.

1966- The film “ Spinout “ premiered. Elvis Presley pioneered the genre movie of bored male movie stars who use their studio muscle to make us watch movies of them racing cars. James Garner in Grand Prix-arguably the best one, Steve McQueen in LeMans, Tom Cruise in Days of Thunder, Sly Stallone in Driven, etc.

Posted by Animation Educator's Forum at 12:15 AM