1599- A Swiss tourist named Thomas Platter was visiting London and kept a diary of his trip. He wrote on this day he attended the play The Tragedie of Julius Caesar by Master William Shakespeare at the New Globe Theatre, and enjoyed it very much. This is the first written account of Shakespeare’s Julius Caesar being performed, and Shakespeare was probably one of the actors. 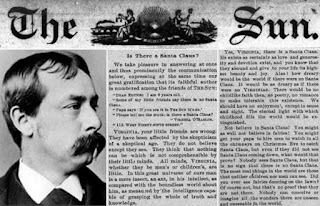 1897- The famous column by Frank Church in Joseph Pulitzer's New York World first appeared with the answer to 8 year old Virginia O’Hanlon’s question :  " ...and yes Virginia, there is a Santa Claus..."

1917-The Gulf Between, the first film shot in Technicolor.

1944- An internal FBI memo concludes "Communist infiltration of the Hollywood Guilds and unions and the only organization that could stop them was the Motion Picture Alliance for the Preservation of American Ideals" a conservative publicity group that included Walt Disney, John Wayne and Gary Cooper.

Posted by Animation Educator's Forum at 1:22 AM