1855- Walt Whitman published his quarto of poems The Leaves of Grass. Many people were shocked at its frank description of sexual desire. Whitman’s mother said: ”Walt is a good boy, but strange.”

1862- Oxford mathematics professor Charles Dodgson rowed ten year old Alice Liddell and her sister up the Thames in a small punt. The little girls begged him for a story, so Dodgson made up fantastic tales of March Hares, Mad Hatters and the Queen of Hearts.
Dodgson later wrote them down and published them in 1865 as Alice in Wonderland. He used the penname Lewis Carroll, which was a joke on the fact that Renaissance scholars adopted big stuffy Latin names like Ludovicus Carolus Magnus.

1883- Buffalo Bill staged his first Wild West Show in North Platte Nebraska. Bill and his partners took the show all over the US and played for the crowned heads of Europe until 1916. 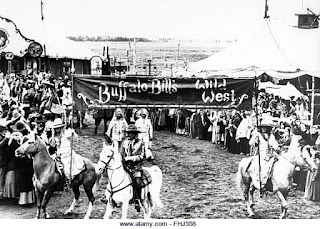 1905- Los Angeles developer Abbott Kinney had broke with his partners over the Santa Monica Pleasure Pier. He moved down the coast to some marshy wetlands and built a new community with canals, lagoons and gondolas. The town of VENICE California was dedicated this day. In 1925, the City of LA got rid of most of the canals and gondolas. Venice went on to be a seaside mecca for Beatniks, Hippies and weightlifters like young Arnold Schwarzenegger.

1911- The first rollercoaster on the Pacific Coast opened on Santa Monica Pier.

1947- THE WILD ONES- 400 motorcyclists converge on a small California town called Hollister to party hard. The local police arrest 49 and call for State reinforcements. The national media sensationalized the wild bikers terrorizing a small town, calling them "Hell's Angels" three years before the first chapter was formed. Truth be told many residents remember the incident fondly and said it livened things up. The Marlon Brando film 'The Wild One" was based on the Hollister incident.

1954- Dr Sam Shepard returned to his suburban Cleveland home to find his wife beaten to death and a man fleeing the scene. Dr. Shepard himself was convicted of his wife’s murder in a controversial trial. People still argue today whether he was guilty or not.
In 1998 Dr. Shepards son got DNA evidence to prove there was another man at the scene the night of the murder, and in 2000 the court threw out his wrongful imprisonment suit. The TV show and film The Fugitive was based on Dr. Shepard.

1969-“ Give Peace a Chance.” released by John Lennon and the Plastic Ono Band.

1976- The first true Punk Band, The Ramones, arrived in England for a tour. They greatly inspired future bands like the Clash and the Sex Pistols. When playing at the Palladium the Sex Pistols said they couldn’t get tickets to get in so the Ramones pulled them in through the men’s room window. Hey, Ho, Lets Go!