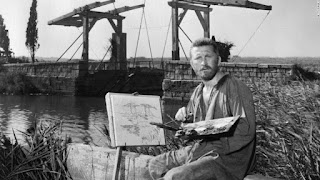 1890- Near Auvers-sur-Oise, artist Vincent Van Gogh went behind a hay bale and shot himself. He didn’t shoot himself in the head but in the gut. He lingered for two more days and died of blood poisoning. He was 37. His brother Theo was so distraught he died six months later of a brain disease and melancholia.

1938- Three Missing Links- a Three Stooges comedy with the boys as cave men and Ray Crash Corrigan in a gorilla suit.

1942- Orson Welles leaves Rio De Janiero after RKO fires him and stops production of "It's All True". They also have “the Magnificent Ambersons” re-cut to a more acceptable 90 minutes. The also fired the executive producer who recruited him to Hollywood.

1962- The film “Dr No” premiered, introducing the world to the suave spy James Bond 007.  They first considered Cary Grant, David Niven and Patrick McGoohan, James Mason, who all turned them down. So the producers picked young Scots actor Sean Connery. Ian Fleming wrote of the decision “ Disaster!!”

1972- Mamas and the Papa's chubby singer Mama Cass Eliot dies of a stroke, not as was widely believed from choking on a sandwich.

Posted by Animation Educator's Forum at 1:50 AM