1929- Steamboat Willie was the first Mickey Mouse cartoon, but Mickey didn’t speak much. He just whistled, yelped and laughed. In the cartoon released this day “the Carnival Kid” Mickey spoke his first words “ Hot Dogs!” The voice was musician Carl Stalling.

1969-   John Lennon and Yoko Ono record "Give Peace a Chance." It became the theme song of the Anti-Vietnam War movement. Because of this song and Lennon’s support of the Hippie protesters the Nixon White House kept a file on him. Lennon spent most of 1972-73 under a constant threat of 60-day deportation from the US.

1994 - Death of Baron Marcel Bich, Italian-born French engineer and industrialist who created an empire through his disposable BIC pens, lighters and razors.

1941-THE WALT DISNEY CARTOONISTS STRIKE.. The picket line and campsite went up across the street where St. Joseph's Hospital is today. Chef's from nearby Toluca Lake restaurants would cook for the strikers on their off time and the aircraft mechanics of Lockheed promised muscle if any ruff stuff was threatened.

1942- JOHN BARRYMORE- The great dramatic actor, the first American to dare to play Hamlet in England, died of his many vices at age 60. Whether the infamous prank actually happened where Raoul Walsh, Bertholdt Brecht, Peter Lorre, W.C. Fields and some others (the "Bundy Drive Boys") kidnapped Barrymore's body from Pierce Brothers Funeral Home and propped it up at the poker table to scare the willys out of Errol Flynn is a matter of debate. Flynn and Paul Heinried said it was true, writer Gene Fowler said it was false.

1978 - Bob Crane, (Hogan-Hogan's Heroes), died at 49 under mysterious circumstances. He was found in a Tucson hotel room surrounded by pornography, bludgeoned to death by a camera tripod.  The murder was never solved.

1999- Hikers in Malibu California discover the remains of Phillip Taylor, the bass guitar player of the 60’s band Iron Butterfly. The musician had disappeared four years before. Now his skeleton was found sitting in his Ford Aerostar at the bottom of a steep ravine. 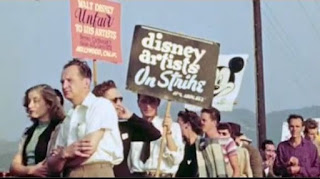 1941- THE WALT DISNEY STRIKE- Labor pressures had been building in the Magic Kingdom since promises made to artists over the success of Snow White were reneged on, and Walt Disney’s lawyer Gunther Lessing encouraged a hard line with his employees. On this day, in defiance of federal law, Walt Disney fired animator Art Babbitt, the creator of Goofy, and thirteen other cartoonists for demanding a union. Babbitt had emerged as the union movements’ leader.  Studio security officers escorted him off the lot.
That night in an emergency meeting of the Cartoonists Guild, Art’s assistant on Fantasia, Bill Hurtz, made the motion to strike, and it was unanimously accepted. Bill Hurtz will later go on to direct award winning cartoons like UPA’s "Unicorn in the Garden". Picket lines go up next day in cartoon animation’s own version of the Civil War.

1966- the It’s a Small World exhibit, which had been created for the 1964 NY Worlds Fair, reopened at Disneyland, California.

1998- Saturday Night Live comedian Phil Hartman was shot to death by his wife Brynne as he slept. She was a heavy drinker and pill user. At 6:00am as the LAPD were knocking Brynne turned the gun on herself.

1933- Disney’s cartoon “The Three Little Pigs” premiered, whose song “Who’s Afraid of the Big Bad Wolf” became a national anthem of recovery from the Depression.
Director of the short Burt Gillette left Disney afterwards to run the Van Beuren Studio in New York.

1977-The Sex Pistols release their Punk hit God Save the Queen, the Fascist Regime, in time for the Queen’s Jubilee year. She preferred the Beatles’ All You Need is Love. 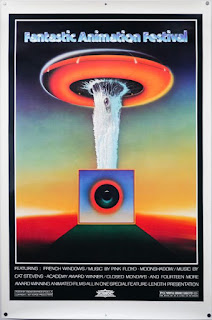 Posted by Animation Educator's Forum at 3:36 PM No comments:

1878- Gilbert & Sullivan’s HMS Pinafore premiered at the Savoy in London.

1911- Thomas Mann visited Venice Italy. On the Lido Beach he was inspired to write A Death in Venice. 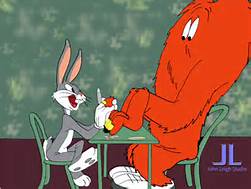 1957- Sid Caesar's Your Show of Show's canceled after nearly a decade. The show used future star writers like Mel Brooks, Carl Reiner, Woody Allen and Neil Simon.  They pioneered the executive strategy of network programmer Pat Weaver to not let the show be owned by an entire sponsor, but the network would produce the show and would sell the sponsor commercial time in 30 second chunks. Pat Weaver’s daughter is Sigorney Weaver. Your Show of Shows was finally bested in the ratings by The Lawrence Welk Show.

1980- Evangelist Oral Roberts claimed he saw a 900-foot Jesus over his bed.

1950- Married movie star Ingrid Bergman shocked American morality by having an open love affair with neorealist film director Roberto Rosselini. This day they were finally married but the outcry of conservatives about this “Apostle of Degradation” was such that her image needed a makeover. So she played Saint Joan of Arc.

1991- Tri-Star Pictures 75 million-dollar flop "Hudson Hawk" opened.
Star Bruce Willis, whose own salary was $17 million, blamed the film’s costs on union filmworkers’ salaries. He would return to his car after a day’s shooting to find it covered with animal excrement. The film almost sank his career. Willis’ next two films, "Death Becomes Her" and 'Pulp Fiction", he did for scale. In 2000 he gave a $100,000 dollar donation to the SAG/AFTRA strike fund.

Posted by Animation Educator's Forum at 12:10 AM No comments: