1930- Disney animator Ub Iwerks, the animator/designer of Mickey Mouse, quit the studio to set up his own place. Walt was stunned by the defection of one of his first employees and closest friends. Iwerks studio produced Flip the Frog Cartoons, but it eventually failed, and he'll return to Disney to invent the xerox process. Iwerks partner was Pat Powers, who’s PowersCinephone was the process used to put sound on “Steamboat Willie”. Powers engineered the break between Ub and Walt when Disney refused to let him buy into a co-partnership in Disney Studio.

1932- Museum of Modern Art in New York has first major retrospective of the style of architecture called "THE INTERNATIONAL STYLE" Steel girder frames with large windows for walls and no ornamentation. This style pioneered by Mies Van Der Rohe, Le Corbusier and Phillip Johnson. Called by critics "vertical ice cube trays" they now dominate the skylines around the world, making Moscow and Shanghai equally unrecognizable from Pretoria, or Newark, New Jersey. 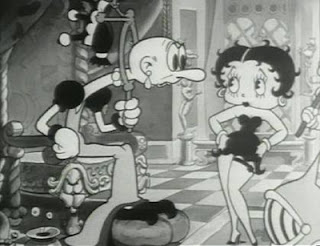 1951- Frank Sinatra was subpoenaed by the Senate Kefhauver Committee looking into the activities of the Mafia. In deference to Old Blue Eyes public persona, strings were pulled so he was allow to testify in his attorney’s private office high in 30 Rockefeller Plaza at 4:00 a.m.

1978- Unemployed auto mechanics Gatchko Ganas and Roman Wardas broke into the tomb of Charlie Chaplin in Vevey Switzerland and stole his remains. They tried to hold it for ransom. The body was recovered and the two losers were soon arrested. They were trying to make enough money to open a car repair garage in France.

Posted by Animation Educator's Forum at 1:04 AM