1930- Warner Brothers Cartoons Born.  Leon Schlesinger, the head of Pacific Art and Title, signed a deal with several unemployed Disney animators who had left Walt to form their own studio to draw Oswald the Lucky Rabbit, but had been stiffed by their contacts. Schlesinger had connections with the Warner Bros. since he helped them get funding for the 'Jazz Singer'. They create Leon Schlesinger's Studio Looney Tunes, in imitation of Disney's Silly Symphonies. Bugs Bunny, Daffy Duck, Porky Pig and more result. 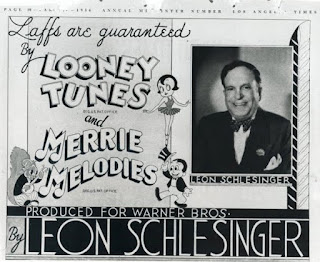 1949- The Admiral Broadway Review premiered on television. The one and a half hour comedy review starred Sid Caesar and Imogene Coca. The show was so popular Admiral was swamped for orders for new televisions and ironically was forced to cancel the show to focus on their production needs. The show was revived as Your Show of Shows, one of the great shows of early television.

Posted by Animation Educator's Forum at 12:27 AM