1924- Columbia Pictures created, ruled by Harry Cohn, who's motto was "I don't get ulcers, I give them!" 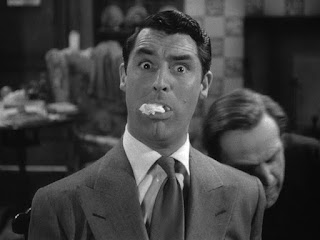 1941- The comedy play ARSENIC AND OLD LACE opened on Broadway. When buying the movie rights Warner Bros agreed to wait until the play ended its theatrical run. They thought plays usually are done in a few months. Arsenic and Old Lace ran until 1944.

1949- For years the recording industry had been working on ways to improve the 78 RPM record –RPM means Rotations Per Minute. RCA records announced the invention of the 45 RPM record. Columbia (CBS) had announced the LP 33 rpm record and originally offered to share the technology but RCA (NBC) was having none of it. But the 33 stored more music and could use old 78 rpm turntables adapted so the 45 soon became a vehicle for hit singles.

1970- Masterpiece Theater debuted on US TV with Alastair Cooke. The first show was the BBC series The First Churchills. These shows were so popular that for awhile people thought PBS meant Preferably British Shows.

2000- AOL and Time Warner announced a $165 billion dollar merger that made it the world’s largest media company. Considered now one of the worst business deals in history, the company lost $80 billion in one year. The deal almost sank both companies, uprooted both chairmen, and they detached permanently in 2009.

Posted by Animation Educator's Forum at 1:28 AM