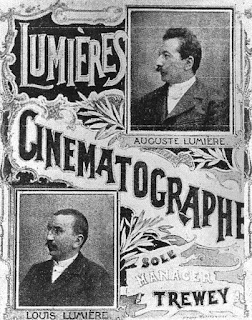 1895- THE BIRTHDAY OF CINEMA- In Paris at the Grande Cafe des Capucines the Lumiere brothers combined Edison's kinetoscope using George Eastman’s roll film with a magic lantern projector and showed a motion picture to an audience in a theater. Back in the U.S. Thomas Edison thought the idea of projecting film in a theater was foolish and would never catch on. They called their device a Cinematograph, hence the word Cinema is born. The screening included dancers and people leaving a factory but the biggest reaction out of the audience was from shots of waves crashing on a rocky beach. The audience in the front row jumped for fear of getting wet.

1897- Edmond Rostands famous play CYRANO DE BERGERAC premiered in Paris. There really lived a poet-duelist in the 1640’s named Cyrano de Bergerac-Servigan but little was known about him. Rostand created the hopelessly lovesick big nosed hero who helps another man romance his Roxanne.

1944- ON THE TOWN, a musical written by Betty Comden & Adolf Green and young composer Leonard Bernstein premiered in NY.

1983- Dennis Wilson was the original drummer of the Beach Boys, but he had a pretty bad drug habit. He was once friendly with the Manson Family.
Taking time off from rehab for Christmas he and some friends sat on a yacht doing more drugs and booze near Marquesas Pier.  Wilson recalled this very spot was where after breaking up with his first wife he threw her mementos overboard. He wondered if he could get them back and started “pearl-diving “i.e.-diving holding your breath without any scuba equipment. But being stoned after several dives, he miscalculated the depth he had gone to and drowned.
Dennis Wilson was 37. Of all the Beach Boys he was the only one who actually liked to surf.

Posted by Animation Educator's Forum at 1:19 AM