1937- Mae West does a comedy routine on national broadcast radio with Don Ameche about Adam and Eve that was considered so racy CBS banned her from their network.
At the same time she got fined by the networks for joking about ventriloquist puppet Charlie McCarthy:" Hmmm…he’s all wood and a yard long!"

1960- A young, eccentric man named Jerry Garcia was dishonorably discharged from the U.S. Army. He had done things like drive a tank into a field then walk away. He had been AWOL 8 times in one year. After leaving the army, Jerry Garcia became a hippie musician in San Francisco. In 1966 formed the rock band the Grateful Dead.

1975- Rod Stewart announced he was leaving the band Faces, for a solo singing career.

1984- Pixars first short The Adventures of Andre and Wally-B released in theaters. Directed by Alvy Ray Smith and animated by John Lasseter.

1998- Dreamworks feature cartoon the “Prince of Egypt”, or, as it was known in Hollywood," The Zion King". 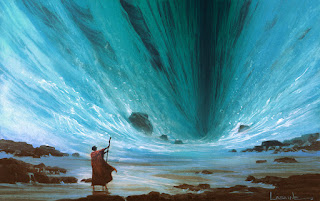 Posted by Animation Educator's Forum at 1:06 AM