1955- Carl Perkins awoke in the middle of a bad nights sleep and wrote Blue Suede Shoes, the first song to be a hit in Country, R&B and Rock n’ Roll charts simultaneously, especially when sing by Elvis Presley” Well you can knock me down, step on ma face, etc.”

1969- Walt Disney re-released Fantasia, and it was embraced by hippy stoners who liked to get high during screenings, Disney did a black-lite poster for it. It was the first time Fantasia ever made a profit. 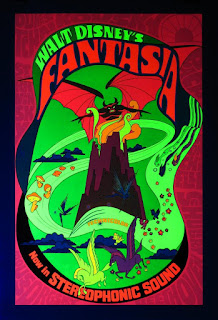 1989- After appearing in some interstitial shorts on the variety Tracey Ullman Show, The Simpsons first premiered as a regular TV series.

Posted by Animation Educator's Forum at 12:28 AM