1938- To make the film "Gone With the Wind" Producer David Selznick and director Victor Fleming shot the massive "Burning of Atlanta" in Culver City, California. The sequence was storyboarded and designed by William Cameron-Menzies, who designed the sets for Intolerance for D.W. Griffith. Selznick used the opportunity to clean the studios backlot storage, destroying sets from King Kong, Little Lord Fauntelroy and Last of the Mohicans in the inferno. They shot the scenes with three Rhett Butler stand ins.

1967- R&B star Otis Redding and four of his band the Bar Kays were killed in a small plane crash near Madison Wisconsin. He was 26. Redding had recorded his hit “Sitting on the Dock of the Bay” just three days earlier. 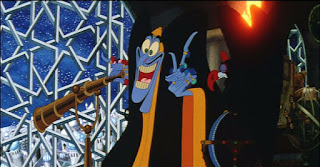 2013- Richard Williams famed unfinished epic animated film the Thief and the Cobbler received it’s premiere at the Motion Picture Academy in Beverly Hills. It was begun in 1972.

Posted by Animation Educator's Forum at 12:32 AM