1950- In a heated and emotional showdown in the Directors Guild all motions by C.B. DeMille and Frank Capra to extend the Hollywood anti-Communist blacklist to include expulsion from the Director's Guild are defeated. Billy Wilder, John Huston, John Ford and Mervyn LeRoy supported President Joe Mankiewicz who blocked the Blacklist Motions, and they also prevented a recall vote on Mankiewicz' s presidency. 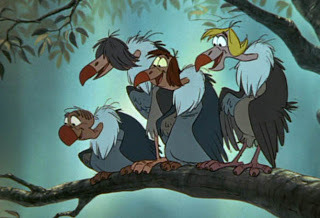 1967- Walt Disney's last cartoon done under his supervision "the Jungle Book." premiered. Disney had died the previous December. If you remember the film the end sequence Mowgli meets four vultures who talk like the Beatles but sing barbershop quartet. That’s because the characters were supposed to sing a Beatles parody song but Walt felt the group would soon be forgotten so he didn't want to date the film.

Posted by Animation Educator's Forum at 12:50 AM