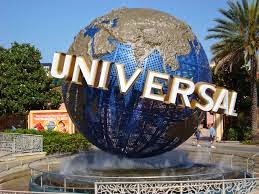 HAPPY 100TH UNIVERSAL STUDIOS 1915- Universal Studios formed. Carl Laemmele bought a huge track of Burbank farmland and set up his studio. Laemmele had wooden bleachers built next to the movie sets where he charged people a nickel to come watch the filming. Universal actually had been operating as a film company since 1912 but the company counts today as its birthday.

1941- The daughter of Cecil B. DeMille, Katherine DeMille, had married actor Anthony Quinn. This day tragedy struck the family. On a visit to Cecil B.’s estate the couple’s three year old son Christopher walked off into neighbor W.C. Fields yard where he fell into Fields unsupervised swimming pool and drowned. The parents were so shattered they divorced afterward. Anthony Quinn refused to talk about the rest of his long life. Fields was so depressed he had the pool filled in and landscaped so no reminder of the tragedy would remain.

1944- The DeHAVILAND CASE- A judge ruled actress Olivia DeHaviland free of her exclusive seven year personal contract to Warner Bros.. For years movie stars like Bette Davis, Barbara Stanwyck and James Cagney had been fighting in court the system of exclusive contracts the studios used to keep them under control. They had no choice in the type of films they did, no residuals and studios could rent them out to other studios for higher fees and keep the money.
If the actor complained they were put on disciplinary leave by the studio without pay and the penalty time added onto the end of their contract. Garbo called it the closest thing to White Slavery. Some contracts even ordered some stars not to get married for fear it would erode their sex appeal. The DeHaviland Case broke that system and allowed actors to make their own deals.

1964- The book The Feminist Mystique by Betty Freidan first published. The first major book to point out women were unhappy with their second class domestic roles. And it coined the term Feminist.

1969- Two young heirs to the Polident false Teeth Company and two hippy promoters announced a rock festival would be held that summer in the farm community of Woodstock New York.

THIRTY YEARS AGO 1985- Symbolic.com is assigned the first registered private domain site on the Internet.

Posted by Animation Educator's Forum at 1:38 AM